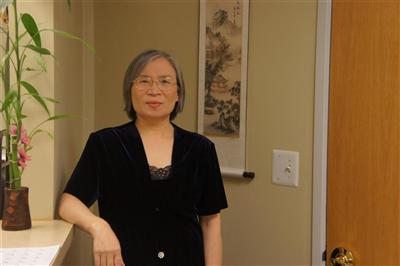 Dr. Shan Kong, licensed & nationally certified acupuncturist, for over 40 years clinical experience in Chinese herbs and acupuncture. Dr. Shan Kong is the founder and director of Acupuncture & Chinese Medicine Center which has expanded to several clinics. She is the most senior and experienced practitioner in the area, and high respected in the field. Dr. Kong is descended in a direct line from Confucius (73rd generation) and always adheres to the strictest medical ethics. In her youth, she experienced 10 years of upheaval during the Cultural Revolution in China; these experiences have shaped the course of her medical career and distinguished it from others.

Dr. Kong comes from a highly esteemed family that has practiced Chinese medicine and acupuncture for seven generations. Her acupuncture and Chinese medicine training started at the age of 5, under the guidance of her father and grandfather who were both prominent doctors and leading expert in their field. At the age of 7, she successfully administered acupuncture to a seizuring neighbor. During the Cultural Revolution and at the young age of 17, Kong was forced to rural China with the entire youth population of the country. While there, she began to formally practice Chinese medicine and acupuncture. She worked diligently and tirelessly from sunrise to sundown, often waking up in the middle of the night to help those in need. Her inspiring medical ethics and her successful treatment of patients gave her a reputation of excellence that spread near and far. Two years later, she became quite well-known in the medical field and was invited to teach acupuncture training classes to physicians with degrees in Western medicine by the Harbin (Medical) Health Bureau (the top medical authority in a city of 4 million people). In the same year, Kong was promoted to work as an acupuncturist by the Harbin City Government at the Harbin 6th Hospital.

In 1978, in an effort to strengthen major medical institutions and to eradicate the damage caused by the years of turmoil of the Cultural Revolution, the Chinese government began looking for the best Chinese medical doctors in the entire country. The candidates were selected through a very strict evaluation process. Dr. Kong competed with thousands of other candidates for a placement and achieved a prestigious first place position in the Heilongjiang Province.

After she studied Clinical Western Medicine, she opened her own clinics which combined Chinese medicine, acupuncture and Western medicine. As a part of the acknowledgement of her successful medical career, the Chinese government awarded her the title of “Most Distinguished Physician.”

In addition to the diseases that are listed in the range of acupuncture, Dr. Kong specializes in treating:

In addition to the 77 ailments for which acupuncture has been shown to be an effective treatment by the World Health Organization, Dr. Shan Kong has successfully expanded the scope of the effectiveness of acupuncture since 1968.

“I Will Devote My Energy To A Lifetime Of Healing Through Acupuncture”
Dr. Shan Kong

“There Were Four Things Which The Master Taught—letters, Ethics, Devotion Of Soul, And Truthfulness"
Confucius
(552 B.C.—479 B.C.)